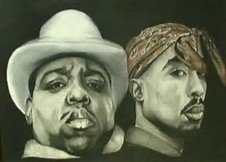 To live a life of no regrets started from the life of cigarettes
The life of a gangster, or you can even say gangbuster,
For him no cares, and to understand him no one dares
He's just another Oakland thug; society will crush him like a slug

There's no doubt that he claims blue; he tries and tries to stay true
One day driving a stolen Camry, he got pulled over and thrown in jail
He was charged with felony number one; he's neither shocked nor stunned...

But the lesson is never understood, soon he returned to his hood
He met his crew in the avenue and the life of sin continues
He had no dream of kids or wife, all he understands if thug four life
One after another his partners die; he would leave all this pain if only he could fly...

He struggles day after day telling himself everything is okay
Soon, even his best friend is dead, and an empty future lies ahead
There's so much love that he needs, he screams as his soul will bleed...
Now everybody is gone; his crew is no longer strong

He chooses to rebuild his life even though it could end with a bloody knife...
To school he goes every day; he tries to listen to what the teachers say...

He's finally living in the right way; he feels the future is light
He doesn't even think of the day he'll be dead
All he sees is a strong future lying ahead