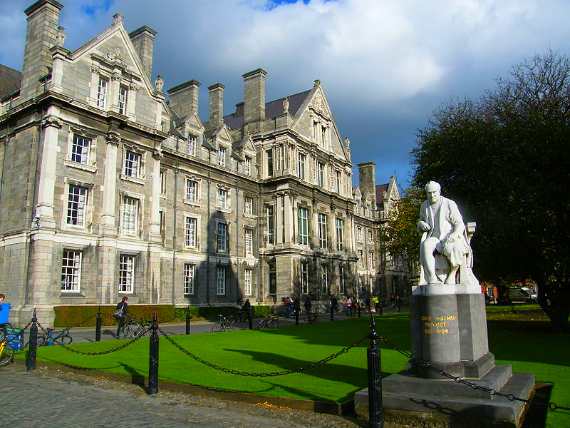 Because of the unique history of Ireland, Irish Poetry always begs the question ‘What makes poetry Irish?’ The genre itself is represented by its historic Gaelic form, as well as the more recent and familiar English variety.  The English language poetry of Ireland, at least in its most recent iteration, has been greatly influenced by its Celtic forebear, and the interplay between the two traditions creates a rich and uniquely Irish style.

Irish poetry was historically an oral tradition, especially at a time when few people could read or write.  Thus poems were usually short pieces that were easily remembered. In to ensure accurate repetition, oral poets deployed “complicated rhyme schemes that would render a poem nonsensical if any of the key words were changed from the original version.” (extract from Wikipedia)

Poetry in the Irish language dates back to at least the 6th century, perhaps the oldest surviving poetic form in Europe. The more recent English version dates from the 14th century.  English language poetry in Ireland did not really absorb specifically Irish themes and Gaelic paradigms until the turn of the 20th Century, during the period of the Celtic revival. This movement sought to sublimate British cultural influences on Irish poetry in favor of more authentically Irish subjects, such as mythology and rural traditions.

W.B. Yeats had a huge impact on Irish writing and was largely responsible for the Celtic Revival. His work frequently focused on expressly Irish topics.

During the past 25 years, Irish poetry took on more universal themes as society became more cosmopolitan and urbanized.

The pantheon of great Irish writers is far too numerous to list here.  At My Word Wizard we have begun to explore specifically Irish writings and have assembled a collection of works that track the evolution of the genre. We look forward to adding more to this collection.

We think you will enjoy the wonderful Irish writings contained on these pages.

Taitneamh a bhaint as! (Enjoy)


Find a Poem From the World's Best Irish Poets

Poems of W.B. Yeats: One of the most imporant and beloved writers in the English language, Yeats was at the forefront of the Celtic Revival movement, which sought to insert Irish themes into English language Irish writing. His early writings were influenced by Celtic mythology. He continued to show an interest in the transcendental throughout his life, but as he grew older his work began to demonstrate a more physical, earthly realism.

Oscar Wilde Poetry: Born in Dublin into a family of intellectuals, Wilde honed his writing style over the course of many years. By the early 1890’s he was one of the most widely celebrated playwrights in London. Apart from his poems and plays, he is perhaps best known for his clever satirical statements as well as his classic novel The Picture of Dorian Gray.

The Works of James Joyce: One of the most influential writers of the 20th century, Joyce is perhaps best known for his epic novel, Ulysses, published 1922, and Dubliners, a book of short stories published 1914. Other works include Finnegans Wake (1939) and A Portrait of the Artist as a Young Man (1916). Joyce also wrote three books of poetry.

Jonathan Swift Poetry: Swift's name is synonymous with prose satire and he set the standard for the form in the English language. He is most widely known for classic works such as A Modest Proposal, A Tale of a Tub, Gulliver's Travels, Drapier’s Letters and An Argument Against Abolishing Christianity. Lesser know for his poetry, we are pleased to offer you a small selection.

Poems of Patrick Kavanagh: One of the most popular modern poets of Ireland, Kavanagh was born into a rural farming family, and he never forgot his roots. His work was a straightforward representation of Irish rural life free of the sentimentality.  His epic poem and perhaps his greatest offering, The Great Hunger, was published in 1942. The piece depicted the deprivations of country life.

If you appreciate writing from Ireland, we think you will enjoy these:

Irish Quotes: Irish sayings, epigrams, blessings and proverb are beloved around the globe. You don't have to have roots on the Emerald Isle to appreciate the wonderful wit and satire that form an important part of the Irish literary tradition.

Submit an Irish Poem and We'll Publish It

Complete the form, making sure to include all information in the required fields. We will get back to you if your submission is accepted. Indicate whether you would like your name to appear with your work. You may choose a pen name if you wish, or you may choose to remain anonymous.

Please note that authors retain full copyrights to any work(s) submitted via this online submission form. Previously published pieces are welcome provided the author has the rights and necessary permissions to do so.

Click on any of the links below to view a poem in its entirety.

The people started shouting, from Mayo down to Cork. The message passed from Flaherty, to Reilly and O'Rourke. 'Have you heard about O'Casey? Bejays, …

Dealing With The Past

Tell me old man, who used to live here Death, hunger, hatred and plenty of fear And tell me old man are they still around Oh yes my boy in every town. …

May the road rise up to meet you. May the wind always be at your back. May the sun shine warm upon your face, and rains fall soft upon your fields. …

There was once an Irish+English girl, who had quite a few little curls. She stared at the English grass, and sighed "oh how I wish this was Irish marsh" …

The Isle Of Innisfree Not rated yet
It's without doubt a small isle but of natural beauty Such a tranquil green place, the Isle of Innisfree Set in Irelands Lough Gill, in the County …

Molly Not rated yet
The year was eighteen-forty eight. And Molly knew she couldn’t wait. Many she knew had already died. It was time to cross to the other side. Molly …

The Great Irish Famine 1845-1852 Not rated yet
Ireland was suffering a terrible fate People were dying at an alarming rate The potato crop failed because of the blight Little help was given, now that …

A Song for the Irish Not rated yet
Upon a quilt of green, I lay, and listened to the auld songs sung in plaintive joy. Earth, hill and stream echoed, in chorus, the hymns, …

A Song for the Irish Not rated yet
Upon a quilt of green, I lay, and listened to the auld songs sung in plaintive joy. Earth, hill and stream echoed, in chorus, the hymns, …

Irish Sayings & Quotes Not rated yet
An Irishman is the only man in the world who will step over the bodies of a dozen naked women to get to a bottle of stout. Unknown Author …

An Irishman Explains Himself Not rated yet
It is my own decision, my own preference, my choice to be either liked or admired. I have decided that fitting in is not nearly the same as discovering …

From Irish Poetry to My Word Wizard Home