A Graveyard Remembered By A Vampire 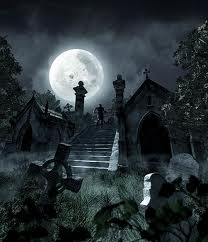 Old, Crumbling, Weathered and Worn.
The Full Moon shining bright above,
Covered though it is by the writhing, and explosive storm.
Yet, somehow a dim light breaks through,
barely illuminating to the barest extent,
the bones, and lone living below.
Drenched, and grieving, with his heart torn to shreds,
a man upon his knees,
is the sole participant of it's glow.
He stares below at his lost love,
unaware, unsuspecting that not too long ago,
he to became a participant,
of the cruel, and unpredictable game that is death,
Of which the outcome is never sure.
The first test resides in the trees that fill the hollow dark surrounding.
A pair of Blood Red Eyes follow his moves,
with the eagerness of the animals they are.
THEY were the ones to take his love, and they have now come for him.
Blood red growls, slightly,
and the forest comes alive with eyes.
The forest surrounding death's home.
The man looks up, instinct driving him to his feet.
He see's his immanent death, and welcomes it,
and ceases to weep, already dead within.
The storm also dies, and the clouds clear away,
revealing the graveyard below.
Old, World-Weary trees, dot through out the bones,
their own death near at hand.
One, stands in the center of all this loss,
a huge testament to the years,
for it has seen more than it cares,
but even it will die, and soon.
But, for now it calls upon a favor, long earned, and never considered.
Until now.
It has seen the death of many men, all good and pure of heart.
Seeing another before it was finally too much to bear.
She, yes it was a she, called upon the favor owed by Death,
for what, Neither remember.
Death stepped out of the ink black darkness,
produced by the tree.
She knew what to do and, stepped forward into sight.
The world seemed to hold it's breath,
as she glided to the man.
Blood Red Eyes faded away, knowing he was prey no more.
The man turned, then upon the disappearance,
And saw Lady Death before him.
He met her skeletal gaze without fear and spoke.
"Rid me of this world, and it's treacherous emotions.
Rid me of my loneliness, pain, and fear."
"Do you want to die?" her voice was silk spun into the night,
making him half close his eyes.
"No. I only want my heart to die, so I may enjoy the world around me for its true beauty, without the taint of grief."
"And, so you shall have it" she whispered,
And killed his heart.

Join in and write your own page! It's easy to do. How? Simply click here to return to Gothic Poems.