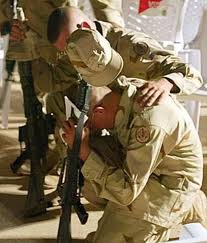 I was just a young man, naive by any measure
To the military, I was an absolute treasure
No defined morals, ethics or things to get in the way
Giving them the opportunity to make me think, do, what ever they say

Shipped off to boot camp with similar guys like me, their peer
Once there, the first two weeks, the drill sergeant was the one most feared
Drills and exercise became the main course of the day
Shooting bullets, bayonets stabbing were made to be just play

Three months in I could see I was becoming another man
Like molding clay, I was putty in their hands
After weeks of simulated war games and psychological drills
I knew not only if I had to, but also, I was ready to kill

Then the day came when it was no longer just play
Destined for the battlefront a sudden explosion marred our way
Chaos issued, bullets and mortar shells exploding all around
When the dust finally settled, it was then I grew sick by what I found

A gut-wrenching scene of dead and bullet riddled bodies, strewn all over the place
They were mostly school-aged children, what we did was a human disgrace
The explosion, a school bus engine backfiring, was the spark to trigger
This band of young soldiers armed, primed for any fight, to make us feel bigger

Since that fateful, life-changing experience, I can never forget
This man, the military made me, is my life’s greatest regret
For now the moral burden of innocent blood spilt by my hand
I can no longer believe in this country’s patriotic stand.