Bobby and The Bike

by Laura Purcell
(Somewhere on Earth) 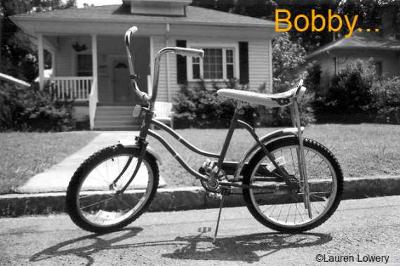 All year round,
Bobby leaves his son’s bike out on the sidewalk.
It leans to one side, propped up on the stand,
the deck of cards strategically placed in the spokes
to catch the wind and purr
flutter softly in the wind.
One tire is flat and in need of replacement,
the red paint has faded and flecked away, but still
it has a profound presence.
It is a permanent fixture in the neighbourhood.
At first it seemed strange, to leave it to rust
The rain and the snow pelting its proud frame for nights on end,
only for the sun to rise and dry its tears.
But when things stay the same, people grow accustomed.
Now old Mrs Wintrob gives it a passing nod in the mornings,
on her way to buy food for her cat, and cigarettes to feed her habit.
She shuffles past in her plaid skirt, with her old air of importance,
oh, she doesn’t expect a reply, from either it or its owner,
but that doesn’t stop her perfunctory greeting.
Bobby’s wife allows her hand to graze the handle every morning
when she leaves for her day job down at the drug store.
She never lingers, never dares settle on the narrow rubber seat.
One finger, maybe two, rarely all five brush against the metal,
and then she’s gone.
Once in her car, it might seem to the superstitious that the bike watches her leave
that its worn cards flap a tiny bit harder
as though waving goodbye.
Bobby’s friends sometimes pop round and give the bike a lick of paint
And for a while, he stands there majestically, red and daring, waiting
to dash down the street, weaving through traffic.
But soon, the weather takes its toll,
rain rusts, wind tears and sun blisters.
Anyone in the neighbourhood will tell you, if you’d be so kind as to listen,
that the old champion doesn’t mind battling it out
with treacherous weather, cars in a hurry and a constant position.
They’ll tell you he stands guard.
He keeps watch.
Bobby likes to look out his front window and stare at the bike,
a fond smile on his tired face, too old for its years.
He’ll stand there for maybe ten minutes every day, a palm pressed to the glass.
For Bobby thinks
No,
Bobby knows
That the bike keeps his son with them
All year round.