Color Me Silver and Red 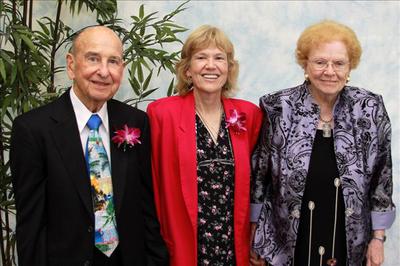 A sparkling trumpet, shiny and silver
In a bright red stocking that Santa would deliver.
This was the toy I received Christmas Day
As I would press down the valves and pretend to play.
My dad would play with that Big Band sound.
Playing like his idol, Harry James, so renowned.

By the age of 9, I could play a real horn
So now the father-daughter duo was born!
We joyfully allowed music to brighten our day.
The occasions would change, but the music would stay.
There’s nothing quite like a trumpet fanfare
To uplift one’s mood and surely clear the air.

I recall the Easter Vigils with chanting so soft
As we watched the solemn processions from the church’s choir loft.
After the extinguishing of the candles’ flames
The lights came on and the “Gloria” was exclaimed.
As our shiny, silver trumpets would declare:
“Jesus is risen; He’s present everywhere!”

I’d chuckle as I viewed awakenings so abrupt.
It sometimes seemed that the trumpets would interrupt
Some dozing congregants who succumbed to a nap.
But on Easter we should rejoice, sing aloud, and yes, clap!
It’s funny the things that you recall out of the blue,
Not realizing at the time how they’ll impact you.

I also recall Dad walking me up the aisle,
But this time another played his trumpet in style.
As I was leaving the church with my husband, Mike
That shiny, silver trumpet still sounded like
What I envision the angels’ choirs must be-
The ones I hope to hear and see.

As the final strains of Trumpet Tune faded away,
We stood on the sidewalk with much to say
As we greeted all our family and friends.
But in an instant I feared that my world might end!
With no warning, Mom fainted, leaning against Dad,
As my emotions plummeted from ecstatic to sad.

Someone called 911 as quick as a wink
As I could feel my emotions suddenly sink.
After sipping some water, my mom came around!
All was OK; she was safe and sound.
We were told it was dehydration;
I felt such total relief and elation.

The bright, red ambulance went on its way,
And mom continued to enjoy my wedding day.
But that bright, red color reemerged one December;
This ambulance was for Dad- I’ll always remember.
He was taken directly to the ICU,
But there was nothing the doctors could really do.

It was time for him to enter eternal life
Where he could play his silver trumpet with zeal-no strife!
As I entered the chapel near his burial site,
A naval officer played Taps so poignantly, so polite.
What happened to me next I’m at a loss to explain;
In fact, some of you might think I’m incurably insane!

When the young officer’s Taps was reverently completed,
I felt pure love as this tribute was repeated.
So I looked at the soldier with my eyes open wide,
But the shiny, silver trumpet remained still by his side.
I then knew for sure, it was my father, who likewise
Played his shiny, silver trumpet, just for me, from Paradise.