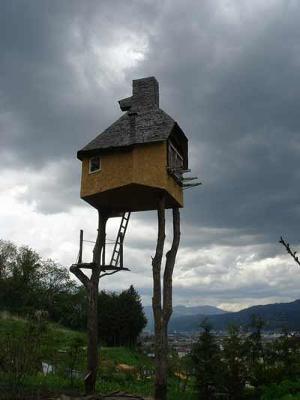 Doug had a fear of depth but not falling.

He had a need to be as close to God as he could get without actually dying.

He knew his foundation was wobbly. The wind could set him sailing.

He knew that to wake up and not look over the mountain tops, to no longer be able to see between the blades of grass as he looked down on them, and to not smell the pine trees as the wind blew under him would be the death that he has feared.

Doug had a fear of depth, of inner depth. Doug feared the kind of depth that only God can possess.

So Doug built himself a house on the tallest sticks he could find, so he could get as near to God as possible. He hoped by being so close he would no longer experience fear.

What Doug didn't realize is that he was alone. The death he feared was upon him and the depth he thought so much about eluded him.