Foes of the Kingdom 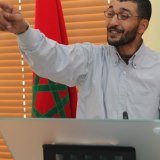 Alarming are these words and full of wisdom
From the mouth of an Arab Poet who is proud
Times do change but some brains, sorry, seldom
Thus, let me tell you the whole story so loud.

In a Realm that is quiet and peaceful in the North
Came scuffling and derailed fools with a tattle
Like ugly toads they think their move is worth
While thousands of thousands are ready for battle.

Conceited, blarneyed, languid, prowling as they are
Unable to thresh the grain of hatred, standing apart
Worse than the Mayor who sold his flesh in the bar,
These new Enemies splurge but scud, hide and dart.

Foes of the Kingdom! All that you sow is hatred
Inside innocent hearts, against every single human,
Thoughtless, blind, for these pure souls are sacred,
Your sin I never saw did a Pharaoh or a Roman.

You kill, you murder, you destroy, you slaughter,
You feel no pain driving the poor to be harmed,
You turn into tears the face of a child with laughter,
And a mother who once, wailing now, was a charmed.

Foes of the Kingdom! Wake up from your slumbering sleep,
You dream, you mislead, you elude to the simple fact,
Your Furor means you are so weak, so dumb, so cheap,
Do foil your brethren, obstacle their progress and act!

Bewandering who is the devil my little brain
I know he is to all these creatures an Enemy
Who would wish blood bedropped instead of rain
For he envies you, him, her, them and even me.

Foes of the Kingdom! Enemies of a hell movement
If you dare menace our safety, I give my throat
I promise you an impassible and pelting moment:
You'll cringe for I have written my revengeful oath.

Brethren of mine be aware of a disguised Enemy!
He may come to your surprise in angel suits,
Starting to preach his insulting blasphemy,
And would rather attack brains than he shoots.

Freedom is the first expression that he uses,
For people’s hearts are easily taken by.
When the love of one's home never confuses,
Their souls this enemy sells and does often buy.

This Enemy possesses the face of a damned demon
Behind nicknames, arrogant titles and a silly program,
He is more likely to be considered a real bad omen,
For his first famous letter belongs to a Satanic ideogram.