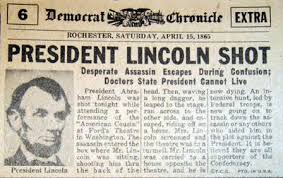 (i admit to own a passion for the Civil War in general,
and the life and death of
the sixteenth president in particular).

between a hard spot of whiskey
and draughts of arrack
nonetheless (without doubt), this Yankee
would be fain toot ravel back

to Antebellum America
amidst the urban din and clack
where smelting earsplitting,
choking industrialization

modestly admits to whiz knack
crafting literary concoctions with no lack
of ideas, where one arose
strong as an oncoming mack

and white (digital remastered technicolor)
exemplified, enumerated, and emphasized
how a minor dispute got way offtrack
whereat the stately commander in chief did pack

a punch analogous sans,
barreling forth
like unstoppable quarterback
despite his six foot four inch

and Lees' armistice
one hundred and fifty three years ago
the peace treaty signed at Appomattox,
an irrevocable agony did blow
when that fateful, mournful,

somber night at Ford's Theater
the grim reaper didst (like Jim) crow
after one shot rang out blasting,
where crimson tide didst flow

incomprehensible cleft mow
wing down unfinished ambition, which no
one other than Abraham Lincoln could sow
the racial rift, that slavery trucked in tow
generations shackled with compounded woe!