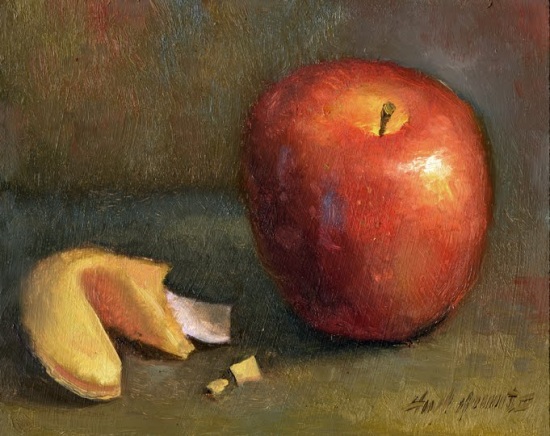 They are the highlight of the meal. Funny Fortune Cookie Sayings and some not so funny, have long been the beloved end to the typical American Chinese feast. The debate, however, rages on as to where these delectable little sources of wisdom originate.

It would appear that the Japanese have the advantage in the dispute. A cookie very similar in look to the modern fortune cookie appeared in Japan as far back as the 19th century. Instead of a paper fortune placed in the hollow inside of the cookie, a small note was placed in the bend of the cookie, on the outside. This type of cookie was called tsujiura senbei (辻占煎餅?) and still found in some regions of Japan.

Most of those claiming to have introduced this special cookie to the United States are of Japanese original.

In 1983, the San Francisco "mock" Court of Historical Review ruled that the American version of the cookie originated with Makoto Hagiwara of Golden Gate Park's Japanese Tea Garden in San Francisco. The city of Los Angeles roundly condemned the decision in favor of its native son, David Jung, founder of the Hong Kong Noodle Company in Los Angeles. Jung claimed to have invented the cookie in 1918.

Other claimants to the title of originator of the American version of the cookie have subsequently thrown their hats in the ring. Though we may never know the full story, it is true that the delectable little treats moved from being a Japanese-American dominated confection to one dominated by the Chinese-American community around World War II. The situation of the internment of Japanese-Americans may have had something to do with this occurrence.*

Regardless of the pedigree, we can all agree on one thing. We love these tasty little cookies and look forward to the interesting little fortunes contained within.


Here are a few fortunes created by our team of cookie experts.  May you enjoy them with great gusto!

You are destined to live large. We suggest you do not eat this cookie.

Always be kind to your teacher, especially before report card time.

You have a thirst for knowledge, and a hunger for wisdom. As you are so hungry, may we suggest dish #7 with rice?

We are but fleas in relation to the universe, but we are giants among fleas.

Wise men advise us that the world is small, but I would not want to paint it.

He received all manner of honors and distinctions, but as a man he was empty.

You will know beauty and joy in your life, but not until you’ve finished your vegetables. So finish up!

A wise man said that women shall one day rule the world, but men shall still pick up the tab.

Your days shall be long and your dreams fulfilled, but only if you pay the bill.

Good things shall come to you in direct proportion to the tip you leave your waiter.

The meek shall inherit the earth, so remember to tip your waiter generously.

It is said that necessity is the mother of invention, and the niece of necessity’s uncle.

You shall be a leader of men, and a follower of women

Your wisdom is revered, and your wealth is a burden. Unload your burden. Remember your waiter.

It is written that a wise man knows his place, and a wise woman has placed him there.

Always speak forthrightly and truthfully, unless exaggerating is more advantageous.


Are you a funny writer or aspiring writer? Our editors are always looking for new sayings to add to our collection. Submit your Fortune Cookie Sayings to our editors by clicking the "submit a poem/contact us" link at the bottom of this page.