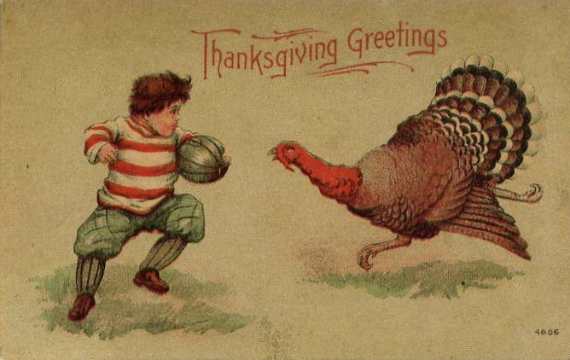 This is the day that commemorates that special feast nearly 300 years ago. Funny Thanksgiving Poems from the writers at My Word Wizard take a look at the lighter side of the holiday, when families gather and nearly anything can happen (and usually does).

Whether its ole’ Uncle Charlie who’d rather watch football than speak with the family, or Aunt Gladys who gives her yearly lecture in defense of turkeys, you’ll find something that resonates in this delightful collection.

Yes, it’s a time for solemn remembrance and giving thanks for all that has been bestowed on us. But it’s also the time for football, cranberries, and lots and lots of family fun.

We hope you enjoy these Funny Thanksgiving Poems.

This year on our Thanksgiving Day
My mother she had lots to say.
“We won’t have Turkey, that’s a fact,
the turkey is innocent so let’s not act,
In a manner harsh or insincere
Instead let compassion guide our year".

But Uncle Joe was not amused,
In fact he was downright confused.
"A turkeyless Thanksgiving Day?"
Is all Uncle Joe could really say
"If this is the case I have no choice.
But this Thanksgiving I won’t rejoice".

Thanksgiving’s here, they have arrived
My crazy family, the Wilson five
There'll be lots of laughs, we may even fight
Sometimes the squabbles last through the night
We’ll play touch football and have some fun
Under the watchful gaze of the autumn sun
The Wilson clan will take their seats
We’ll have our fill, eat lots of meats
The Turkey’s carved, the stuffing’s fine
The cranberries served, dad pours the wine
The Wilsons are madcap that’s for sure
But love them I could not any more
And so on this special day
The Wilsons give thanks
Naught more to say

The Pilgrim Fathers began it all
This holiday that arrives in fall
On that first Thanksgiving Day
They celebrated a harvest and come what may
What was it like in the beginning
did they sit at a loom just spinning and spinning?
Could they even imagine holiday sales
Or were they too preoccupied with their own travails
Did they watch a football game?
Or perhaps lacrosse, of Indian fame
Did they attend the Macy’s Parade?
Or just spread their bread with marmalade
Things have changed from that first Thanksgiving
But still we strive to make a living
In order that we might receive
The blessings and bounty of the life we weave

Just for once on this most American day
I packed my bags and went away
A real Thanksgiving I did seek
Perhaps all alone on a mountain peak
But why on this very day, did I choose to run away?
To miss the parade and the football game
The sales at Macy’s and at Target the same
What gripe could I have against Thanksgiving?
Which stirred in me so much misgiving?
It’s not so nice to whine and groan
But still I chose to be alone
I suppose I wished to imbue the day
With a little meaning in some special way
To think of 1621, when it had all begun
A bountiful meal in the autumn sun
When the Wampanoag and Pilgrims they did feast
In little Plimoth Village, in the east

I sat at the table, eager to eat
To have my fill, right at my seat
My father carved the Turkey
A wonderful sight
My mother asked me “dark meat or white”?
But just before my plate came near
My little dog Edgar pulled up from the rear
He jumped on the table in a single bound
Landing in the middle with nary a sound
He landed on my Turkey
One and all could see
And right there Edgar decided to pee
I shook in horror, I quaked in fright
But in the end, I knew Edgar was right
He’s just a dog, and did what dogs do
I could not be angry, but I told him to shoo
So mother cleaned the table, and discarded the Turkey
And in it's place we had beef jerky!


Share Your Funny Thanksgiving Poems and
We'll Publish them Online


Are you a poet or aspiring poet? Our editors are always looking for new poems to add to our collection. Submit your Funny Thanksgiving Poems to our editors by clicking the "submit a poem/contact us" link at the bottom of this page.