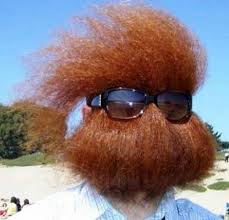 can you see me now?

prior to passing thru cervix, buck naked bare
this grandson of Aaron, the sole heir –
foreshortened to Sol Aire
evinced (as shown via ultra sound),

greater or lesser than seven pounds
(minus or plus a few ounces)
with a mass of dreaklocked hair,
otherwise a gangly sack of many a lovely bone,
whereat obstetricians
could not help himself but jeer

thus upon exiting birth cana; found him twirling loose
kinky follicular fibers accord
ding to medical records,
a combination of his being bored

resembling inimitable indestructible filaments,
when taut could lift off the ground a board
dillow, which no reference manual could address
even topnotch experts queried, could not explain

grew like Kudzu into an immense globular mass galore
('bout the size of Rhose Island) after one year hoar
more, and wove in part from stem cell threads, nor
ceased proliferating after birth placenta
accrued intact and immediately put in cold store

room, a by very peculiar product
tinged with strands of blond hair
evoking how lioness would roar
coccooning, contriving, and conveying this tiny dude

into a self concocted hermetically sealed giant spore
miniature mummy, who without doubt
looked like a lady bug hide entombment
able to survive thermonuclear war
as a minor subsequent repercussion

from maximum security solitary confinement in vest
ment for naught (busting andirons weighing down
with reinforced steel trapdoor cladding
didst not bar compulsive banshee like imps of thee pervert,
but merely slow down