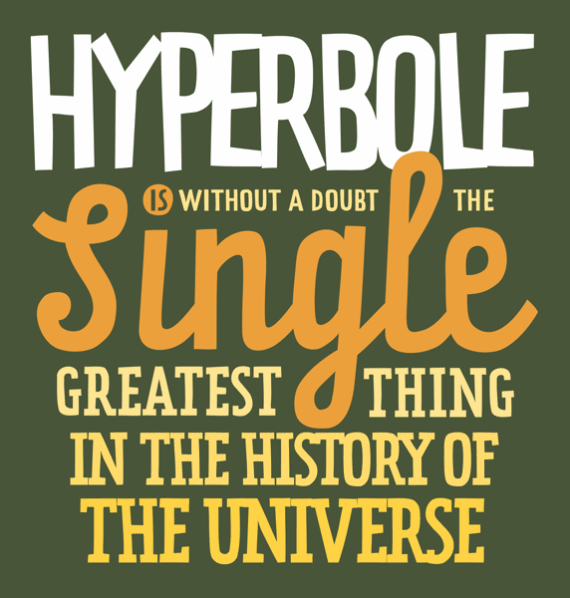 We are all prone to exaggerate at times. Hyperbole Poems from the writers at My Word Wizard take it to the next level with a playful collection of poetry written in overstated, figurative language.

Let's look at a fun example. "His legs are as big as a Mac Truck".  In comparing a person's legs to large truck usually used in construction, we are clearly exaggerating.  Our aim is to express a point that this gentleman's got pretty big legs. !magine the size of his trousers!

You'll really enjoy our selection of verse that stretch the truth (just a bit!).

In a house the size of a postage stamp
lived a man as big as a barge.
His mouth could drink the entire river
You could say it was rather large
For dinner he would eat a trillion beans
And a silo full of grain,
Washed it down with a tanker of milk
As if he were a drain.

I’m bigger than the entire earth
More powerful than the sea
Though a million, billion have tried
Not one could ever stop me.
I control each person with my hand
and hold up fleets of ships.
I can make them bend to my will
with one word from my lips.
I’m the greatest power in the world
in this entire nation.
No one should ever try to stop
a child’s imagination.

A mountain of baby carrots,
a turkey the size of a cow.
a river full of gravy
a dog that says meow
Every pie known to man
and gallons full of ice cream.
By the time my dinner is over
I surely won’t be lean.

His bark breaks the sound barrier
His nose is as cold as an ice box.
A wag of his tail causes hurricanes
His jumping causes falling rocks.
He eats a mountain of dog food
And drinks a water fall dry.
But though he breaks the bank
He’s the apple of my eye.

My tongue is a piece of sandpaper
I’m dissolving into a puddle.
I want to dive into a snowdrift
Though I’m sure that would befuddle
Open me up, my organs are cooked
I think I’m now well done.
You can fry an egg upon my brow
As I melt away in the sun!


Share Your Hyperbole Poems and
We'll Publish it Online


Are you a poet or aspiring poet? Our editors are always looking for new poems to add to our collection. Submit your Hyperbole Poems to our editors by clicking the "submit a poem/contact us" link at the bottom of this page.