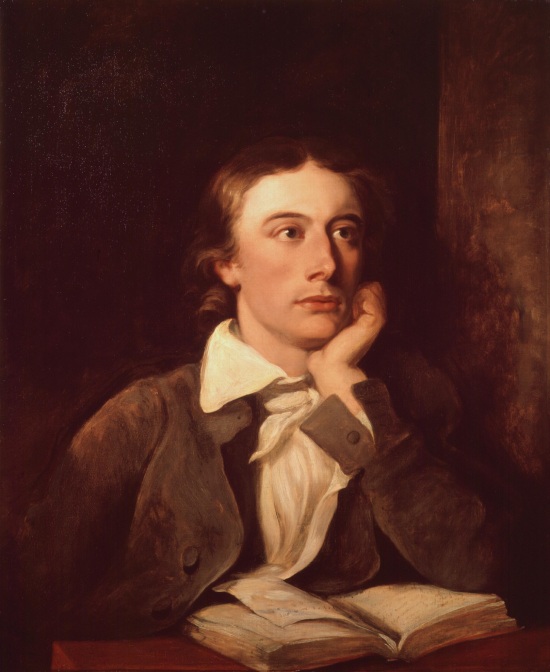 Born in London in 1795, John Keats poetry played a leading role in the second generation of the Romantic Movement. Keats as a poet was not highly regarded during his own lifetime, despite the fact that John Keats figured so prominently in a seminal period of British poetry.  He was seen as something of a parvenu  by the upperclasses, and never fully accepted into polite society.

He was not brought up in a wealth milleu, and John Keats poetry only went into print during the last four years of his life. Despite many personal losses and disappointment in love (impoverishment kept him from marrying the woman he loved), he pursued his passion for writing John Keats poetry with a vigor that belied his situation.

Keat's reputation for poetry grew steadily after his death. By the end of the 19th century he came to be one of the most celebrated of all English poets.

He died in Rome, of tuberculosis, a disease that took both his mother and brother, in February 1821, at the age of 25.

We are sure you will enjoy reading this selection of John Keats poetry.

High-mindedness, a jealousy for good,
A loving-kindness for the great man's fame,
Dwells here and there with people of no name,
In noisome alley, and in pathless wood:
And where we think the truth least understood,
Oft may be found a "singleness of aim,"
That ought to frighten into hooded shame
A money-mongering, pitiable brood.
How glorious this affection for the cause
Of steadfast genius, toiling gallantly!
What when a stout unbending champion awes
Envy and malice to their native sty?
Unnumbered souls breathe out a still applause,
Proud to behold him in his country's eye.

Left to herself, the serpent now began
To change; her elfin blood in madness ran,
Her mouth foam'd, and the grass, therewith besprent,
Wither'd at dew so sweet and virulent;
Her eyes in torture fix'd, and anguish drear,
Hot, glaz'd, and wide, with lid-lashes all sear,
Flash'd phosphor and sharp sparks, without one cooling tear.
The colours all inflam'd throughout her train,
She writh'd about, convuls'd with scarlet pain:
A deep volcanian yellow took the place
Of all her milder-mooned body's grace;
And, as the lava ravishes the mead,
Spoilt all her silver mail, and golden brede;
Made gloom of all her frecklings, streaks and bars,
Eclips'd her crescents, and lick'd up her stars:
So that, in moments few, she was undrest
Of all her sapphires, greens, and amethyst,
And rubious-argent: of all these bereft,
Nothing but pain and ugliness were left.

Bright Star, Would I Were Stedfast


Bright star, would I were stedfast as thou art--
Not in lone splendour hung aloft the night
And watching, with eternal lids apart,
Like nature's patient, sleepless Eremite,
The moving waters at their priestlike task
Of pure ablution round earth's human shores,
Or gazing on the new soft-fallen mask
Of snow upon the mountains and the moors--
No--yet still stedfast, still unchangeable,
Pillow'd upon my fair love's ripening breast,
To feel for ever its soft fall and swell,
Awake for ever in a sweet unrest,
Still, still to hear her tender-taken breath,
And so live ever--or else swoon to death.


On the Grasshopper and the Cricket

The poetry of earth is never dead:
When all the birds are faint with the hot sun,
And hide in cooling trees, a voice will run
From hedge to hedge about the new-mown mead;
That is the Grasshopper's--he takes the lead
In summer luxury,--he has never done
With his delights; for when tired out with fun
He rests at ease beneath some pleasant weed.
The poetry of earth is ceasing never:
On a lone winter evening, when the frost
Has wrought a silence, from the stove there shrills
The Cricket's song, in warmth increasing ever,
And seems to one in drowsiness half lost,
The Grasshopper's among some grassy hills.

On First Looking Into Chapman's Homer

Much have I travelled in the realms of gold,
And many goodly states and kingdoms seen;
Round many western islands have I been
Which bards in fealty to Apollo hold.
Oft of one wide expanse had I been told
That deep-browed Homer ruled as his demesne;
Yet did I never breathe its pure serene
Till I heard Chapman speak out loud and bold:
Then felt I like some watcher of the skies
When a new planet swims into his ken;
Or like stout Cortez when with eagle eyes
He stared at the Pacific -and all his men
Looked at each other with a wild surmise -
Silent, upon a peak in Darien.

When I have Fears that I may Cease to Be

When I have fears that I may cease to be
Before my pen has gleaned my teeming brain,
Before high-piled books, in charact'ry,
Hold like rich garners the full-ripened grain;
When I behold upon the night's starred face
Huge cloudy symbols of a high romance,
And think that I may never live to trace
Their shadows, with the magic hand of chance;
And when I feel, fair creature of an hour,
That I shall never look upon thee more,
Never have relish in the faery power
Of unreflecting love! -then on the shore
Of the wide world I stand alone, and think,
Till Love and Fame to nothingness do sink.

Oh Solitude! If I Must With Thee Dwell

O Solitude! if I must with thee dwell,
Let it not be among the jumbled heap
Of murky buildings: climb with me the steep, -
Nature's observatory -whence the dell,
In flowery slopes, its river's crystal swell,
May seem a span; let me thy vigils keep
'Mongst boughs pavilioned, where the deer's swift leap
Startles the wild bee from the foxglove bell.
But though I'll gladly trace these scenes with thee,
Yet the sweet converse of an innocent mind,
Whose words are images of thoughts refined,
Is my soul's pleasure; and it sure must be
Almost the highest bliss of human-kind,
When to thy haunts two kindred spirits flee.

O soft embalmer of the still midnight!
Shutting, with careful fingers and benign,
Our gloom-pleased eyes, embowered from the light,
Enshaded in forgetfulness divine;
O soothest Sleep! if so it please thee, close,
In midst of this thine hymn, my willing eyes,
Or wait the amen, ere thy poppy throws
Around my bed its lulling charities;
Then save me, or the passed day will shine
Upon my pillow, breeding many woes;
Save me from curious conscience, that still lords
Its strength, for darkness burrowing like a mole;
Turn the key deftly in the oiled wards,
And seal the hushed casket of my soul.

Happy is England! I could be content
To see no other verdure than its own;
To feel no other breezes than are blown
Through its tall woods with high romances blent;
Yet do I sometimes feel a languishment
For skies Italian, and an inward groan
To sit upon an Alp as on a throne,
And half forget what world or worldling meant.
Happy is England, sweet her artless daughters;
Enough their simple loveliness for me,
Enough their whitest arms in silence clinging;
Yet do I often warmly burn to see
Beauties of deeper glance, and hear their singing,
And float with them about the summer waters.

It keeps eternal whisperings around
Desolate shores, and with its mighty swell
Gluts twice ten thousand Caverns, till the spell
Of Hecate leaves them their old shadowy sound.
Often 'tis in such gentle temper found,
That scarcely will the very smallest shell
Be moved for days from where it sometime fell.
When last the winds of Heaven were unbound.
Oh, ye! who have your eyeballs vexed and tired,
Feast them upon the wideness of the Sea;
Oh ye! whose ears are dinned with uproar rude,
Or fed too much with cloying melody---
Sit ye near some old Cavern's Mouth and brood,
Until ye start, as if the sea nymphs quired!

sources, including Wikipedia. For more information on John

Keats poetry, visit the website of The Academy of American Poets