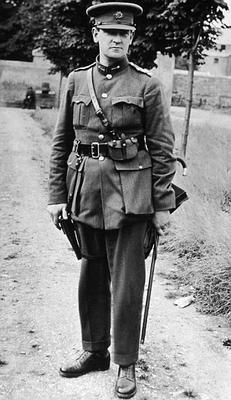 It has often been said that empires come and go
And from the beginning of time that has been so
Empires ruled with terror with an iron fist
Taking brutal action against those, who tried to resist.

On the sixteenth of October in the year eighteen ninety
Michael Collins was born near the town of Clonakilty
He went on to become leader of the Irish Republican army
And whose leadership and guidance, helped set Ireland free.

In his youth he travelled to London, to try and find work
And for nine years he worked, at the post office as a clerk
He took an interest in, the Irish political scene
And he later moved back to Ireland in nineteen sixteen.

It was in nineteen sixteen on a cold wet Easter Monday
That the struggle for Ireland's freedom was getting underway
Many Irish nationalists decided, that they wanted to be
Self governing and from Britain's empire, be free.

Heavily outnumbered and outgunned the uprising failed
The British crushed the rebellion and they had prevailed
The ringleaders were all arrested and sentenced to death
As a grave warning to others, but it wasn't over yet.

Low ranking rebels were interned but were eventually freed
But executions by the British had planted a growing seed
Armed rebel units started forming all over Ireland
Determined they all were, to make a final stand.

Collins took part in the first uprising, and he had survived
Became head of the rebel army and a thorn in Britain's side
He waged a successful guerilla war against the British army
In big cities and towns and out in the country.

The British relied on informers and had a network of spies
And often foiled rebel attempts, taking them by surprise
But Collins got wise to it and and kept one step ahead
He infuriated the British authorities who wanted him dead.

The British then brought over spies to carry out assassinations
And on their death list were prominent republicans
Nicknamed the' Cairo gang' because they'd often meet
At the popular Cafe Cairo in Dublin's Grafton Street.

They were state sponsored killers working for the crown
Their sole objective was, to take prominent rebels down
Collins made sure they never got the chance to assassinate
Because those assassins themselves were about to meet their fate.

A republican spy in Dublin Castle let the rebels know
Where the spies lived so that they'd know where to go
Collins organised hit squads to shoot them all dead
On a cold wet winters morning, many were still in bed.

The British were infuriated and they wanted revenge
And vowed that their spies' deaths, they would avenge
Innocent civilians were targeted, and at Croke Park were shot dead
Ten men, three children and a young girl due to be wed.

More bloodshed then followed with both sides paying the cost
As the death toll grew higher with many lives lost
In nineteen twenty one, peace was about to impend
And a truce was agreed that brought fighting to an end.

Collins and a delegation went to London, to sign a treaty
But it wasn't what he wanted, but was forced to agree
The British kept six counties out of thirty two
It didn't please many republicans, and a civil war did ensue.

In August of that same year Collins, was travelling to Cork City
Saying anti treaty rebels wouldn't shoot him in his home county
His convoy was ambushed and he took a shot to the head
The war of independence hero, now lay on the ground dead.

Join in and write your own page! It's easy to do. How? Simply click here to return to Irish Poems.