My School Is Full Of Mirrors 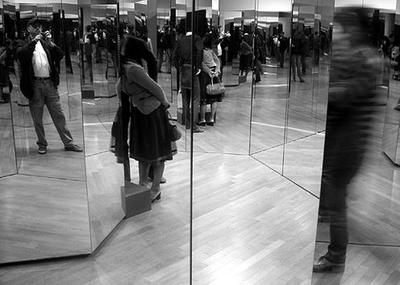 I was the same as them all: paper-thin
Grey, background, the same, blended-in
Floating through halls, drifting along
Singing along to the same song

I wanted to change, I wanted to be
Free, like the birds, free free free FREE
But it seemed I was stuck, just suspended there
Like I was trying to breathe, but with no air

Then New Girl pranced in, utterly unaware
Her presence was striking, was attracting some stares
She seemed to glow, while they seemed to fade
Looking in the mirrors, lurking in the shade

They tried to turn her, just like the rest
She didn't know that she failed the test
New Girl was different, but she didn't know
Because of that, they'd put on a show

They show her what happens to people like her
Her glow grew bright; it caused them to stir
I felt strange from that glow... sort of warm
The others seemed to feel it and began to swarm

A shout pure but terrified
It seemed we all
died