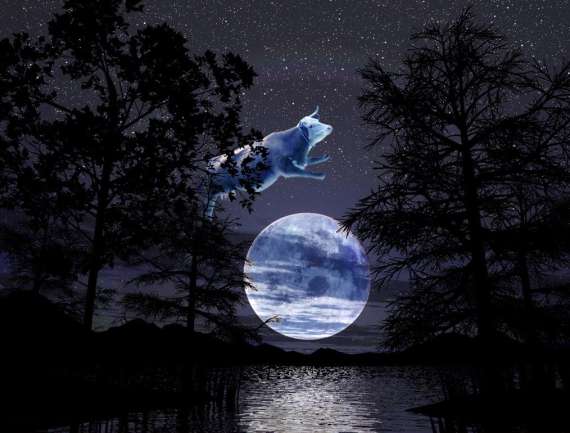 A Personification Poem is a type of figurative verse where inanimate or non-human objects are given human (or animal qualities)! For example, 'The car purred like a kitten,' or 'The trees danced in the wind.' It should come as no surprise that cars can't really purr nor can trees dance. But giving these objects sensational attributes really helps the writer convey an image to the reader. It is actually just like painting, but in this case the artist paints with words.

The effectiveness of this type of poetry is that we can really understand the circumstances the object finds itself in because we recognize the characteristics in ourselves.

To better illustrate this, let's take a look at one of the most famous personification poems, an English Nursery rhyme called "The Cat and the Fiddle".

Hey diddle diddle, The Cat and the fiddle, The Cow jumped over the moon, The little Dog laughed to see such sport, And the Dish ran away with the Spoon.


In the line "the little dog laughed" we are given the impression that what is happening is so ridiculous, so funny, that we can really understand why the dog laughed, because it is something we can identify with.
A fun exercise to do at school is to discuss the meaning of each personification. Why was it used and what does it say to us about the character or situation in the verse.

We hope you enjoy this adorable collection from the writers at My Word Wizard!

The computer ran at breakneck speed
As it spit out all sorts of data
When suddenly it started to sputter and shake
And we all said ‘WHAT IS THE MATTA??’
It let out a flurry of troublesome sounds
Until its large screen it turned blue
We looked at one another in a state of confusion
We just didn’t know what to do!

Has anybody seen my little red bag?
It seems to have a mind of its own.
It carries itself with an air of pride
But its ego is just overblown
You see it really doesn’t understand
That it is I who carry it to and fro
But still I need that little red bag
Because it is time to go!

The circus chair jumped up and down
As it supported the weight of a jolly old clown
The crowd roared and laughed and it even cheered
Except for one section which booed, hissed and jeered
‘A chair can’t jump up and down on its own!’
‘It can’t even move unless it is thrown’
The chair sat upright as it heard this abuse
But the clown turned to her and said ‘it’s no use!’
For even a chair can surely work out
The crowd paid for their tickets
It is their right to shout

I walked through a desert and what did I see?
A lonely young cactus staring straight back at me
It couldn’t have been more than three feet (a meter) in height
But it seems that my presence gave it such a fright
‘I wasn’t expecting you,’ the cactus declared
What could I do, I just looked back and stared
The cactus said ‘have you nothing to say?’
I stood there without speaking and thought ‘this isn’t my day’
‘It was not my intent to give you a scare.’
It definitely wasn’t, I promise, I swear!’
The cactus grew prickly as it chose its next words
‘I just don’t believe you; now fly off with the birds.’


Share Your Personification Poem and
We'll Publish it Online


Are you a poet or aspiring poet? Our editors are always looking for new poems to add to our collection. Submit your Personification Poem to our editors by clicking the "submit a poem/contact us" link at the bottom of this page.