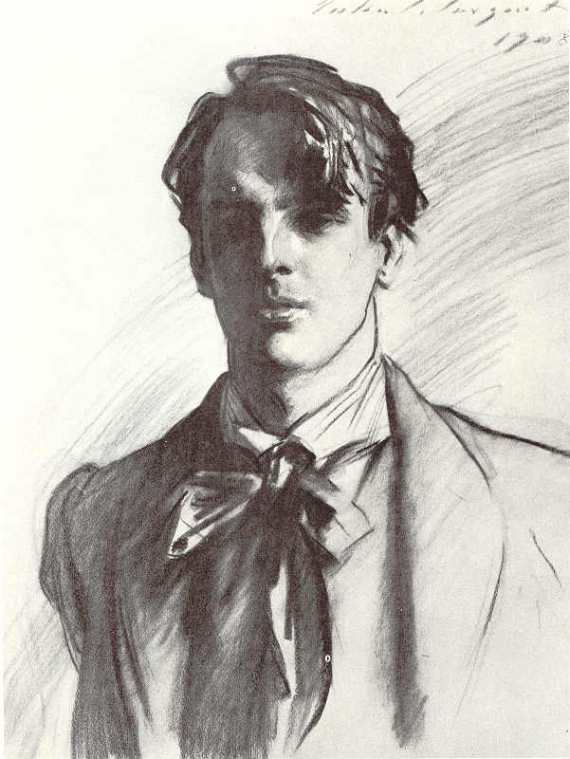 The Poems of Yeats form an essential part of the corpus of work produced by the great writers of the late 19th and early 20th centuries. William Butler Yeats was born in Dublin, in 1865, the son of the prominent Irish painter, John Butler Yeats.  His family was part of the Anglo-Irish landed gentry.

Yeats spent his youth in County Sligo, the ancestral home of his parents, as well as in London. He returned to Dublin at age 15 to continue his studies. He was fascinated by Irish folklore and became an adherent of the Celtic Revival movement, an ideology that sought to insulate Ireland from the cultural influences of English rule.  The writer was a great advocate of Irish heritage.

His first published work of verse appeared in 1889.  Irish legends and mythological themes influenced his early writings and continued to do so through the turn of the century. His interest in the transcendental remained throughout his life, but as he grew older his work began to demonstrate a more physical, earthly realism.

After the establishment of the Irish Free State in 1922, Yeats served two terms as a senator.  He was awarded the Nobel Prize in Literature in 1923, the first person of Irish nationality to have this honor bestowed on him.

William Butler Yeats died at the age of 73 in 1939.  He remains one of Ireland’s most beloved poets.


The Lake Isle Of Innisfree

I will arise and go now, and go to Innisfree,
And a small cabin build there, of clay and wattles made:
Nine bean-rows will I have there, a hive for the honey-bee,
And live alone in the bee-loud glade.

And I shall have some peace there, for peace comes dropping slow,
Dropping from the veils of the morning to where the cricket sings;
There midnight's all a glimmer, and noon a purple glow,
And evening full of the linnet's wings.

I will arise and go now, for always night and day
I hear lake water lapping with low sounds by the shore;
While I stand on the roadway, or on the pavements grey,
I hear it in the deep heart's core.

He Wishes For The Cloths Of Heaven

Had I the heavens' embroidered cloths,
Enwrought with golden and silver light,
The blue and the dim and the dark cloths
Of night and light and the half-light,
I would spread the cloths under your feet:
But I, being poor, have only my dreams;
I have spread my dreams under your feet;
Tread softly because you tread on my dreams.

I HAVE met them at close of day
Coming with vivid faces
From counter or desk among grey
Eighteenth-century houses.
I have passed with a nod of the head
Or polite meaningless words,
Or have lingered awhile and said
Polite meaningless words,
And thought before I had done
Of a mocking tale or a gibe
To please a companion
Around the fire at the club,
Being certain that they and I
But lived where motley is worn:
All changed, changed utterly:
A terrible beauty is born.

That woman's days were spent
In ignorant good-will,
Her nights in argument
Until her voice grew shrill.
What voice more sweet than hers
When, young and beautiful,
She rode to harriers?
This man had kept a school
And rode our winged horse;
This other his helper and friend
Was coming into his force;
He might have won fame in the end,
So sensitive his nature seemed,
So daring and sweet his thought.
This other man I had dreamed
A drunken, vainglorious lout.
He had done most bitter wrong
To some who are near my heart,
Yet I number him in the song;
He, too, has resigned his part
In the casual comedy;
He, too, has been changed in his turn,
Transformed utterly:
A terrible beauty is born.

Hearts with one purpose alone
Through summer and winter seem
Enchanted to a stone
To trouble the living stream.
The horse that comes from the road.
The rider, the birds that range
From cloud to tumbling cloud,
Minute by minute they change;
A shadow of cloud on the stream
Changes minute by minute;
A horse-hoof slides on the brim,
And a horse plashes within it;
The long-legged moor-hens dive,
And hens to moor-cocks call;
Minute by minute they live:
The stone's in the midst of all.

Too long a sacrifice
Can make a stone of the heart.
O when may it suffice?
That is Heaven's part, our part
To murmur name upon name,
As a mother names her child
When sleep at last has come
On limbs that had run wild.
What is it but nightfall?
No, no, not night but death;
Was it needless death after all?
For England may keep faith
For all that is done and said.
We know their dream; enough
To know they dreamed and are dead;
And what if excess of love
Bewildered them till they died?
I write it out in a verse -
MacDonagh and MacBride
And Connolly and Pearse
Now and in time to be,
Wherever green is worn,
Are changed, changed utterly:
A terrible beauty is born.


Information on the Poems of Yeats compiled

from various sources including Wikipedia and

From Poems of Yeats to More Irish Poetry

From Poems of Yeats to More Famous Poets