Run Run Run As Fast As You Can 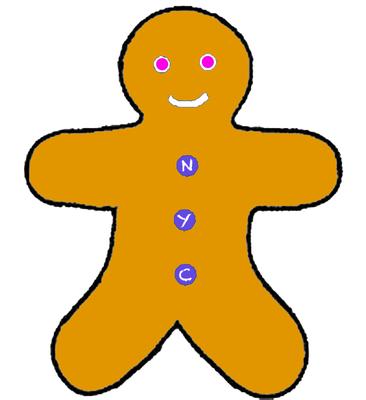 I remember it like it was yesterday, but it was Christmas Eve morn.
I hopped on to the train tired from having wrapped gifts late the night before.
Cold from the winter and weary from the icy rain
I headed for the mall, once I stepped off of the train

But one very wide man in a large black coat, a dark black hat, and skin of gold
Descended by with Gumdrop eyes, an icing smile and no nose!
He held a coffee to his candy lips but could not take a drink
And when he saw me staring as he passed he surely winked!

I had to see if it was true, was this the real man of Gingerbread
I got to the top of the up escalator, and raced to go back the downward one instead
I spotted him already at the bottom racing to the street
He had a funny wobble, but no other busy shoppers noticed his cookie feet

He rushed into a train as I pushed my way through the line
I caught up to the train as the doors closed and made it just in time
I chased him through the subway while the train went fast in motion
Pushing others out of my path, because they had no notion

The train came to a stop, and the weird shaped man walked out formal
I ran behind him, whipped him round, but he appeared quite normal
Just a regular looking man, with eye, nose mouth and coffee
He wore normal shoes and jacket, and his skin was no longer like toffee

He looked at my surprised face and said, “I’m just a salesman, James Bard.
I sell cars. Instead of always running, take my card!”
I took the card and felt so silly. Chasing a person, boy, was I insane
I said good day and slumped around, and got back on the train

I sat down calm, laughed to myself and slowly read the card
On it I found out the man’s name was James G Bard.
James G Bard, Jim G Bard….Gingerbread….could it be?
I flipped the card around, and in big red letters it said:
“You’ll never catch me!”