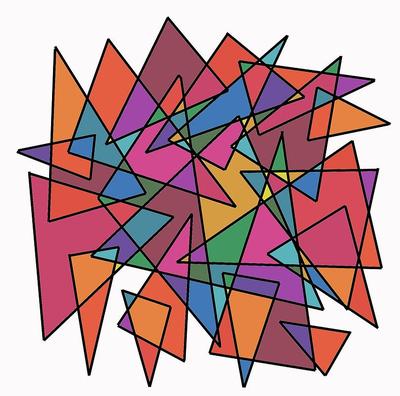 When it comes to triangles,
There are seven in all
Three sides, three angles
Big or small

The right triangles are first
Because they are always right
The right angles are ready to sing the verse
That their friend, the hypotenuse, wrote last night

Next up was the acute triangle
Who danced its way to the stage
It wore a custom covered in spangle
And leather made from a swage.

With its loud, bass voice,
The obtuse triangle began to sing
"The opera tune was a good choice,"
Said the obtuse angle to the triangle king.

Even though it practiced backstage,
The isosceles triangle started to panic
Its knew its two congruent sides wouldn't fit on the stage
Because they were gigantic.

Finally, the equi duo appear,
And they look ready to go
They have no fear
And want to close the show

With its three congruent sides,
The equilateral triangle entered from the right.
It looks across the stage's divides
To see its partner smiling bright.

With its three congruent angles in view,
The equiangular triangle entered from the opposite side
They met in the middle on cue
And danced the night away until it was time to subside.

When it comes to triangles,
There are seven in all
Three sides, three angles
Big or small

Join in and write your own page! It's easy to do. How? Simply click here to return to Teacher Poems.