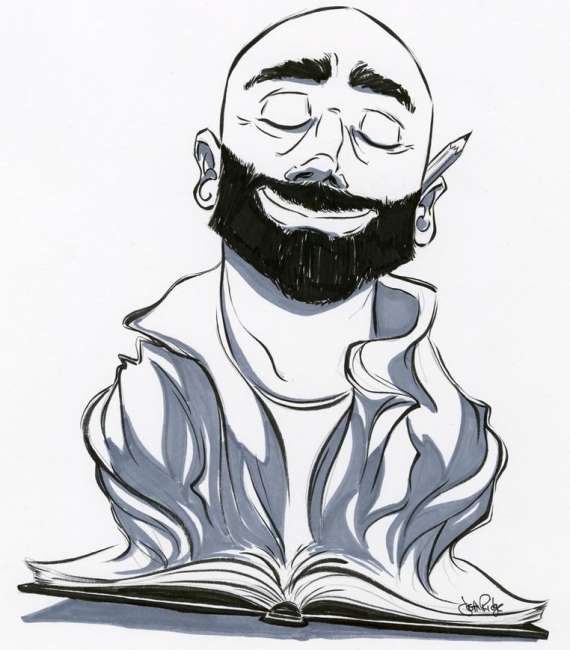 Shel Silverstein Poems have been a staple on children's reading lists for nearly five decades. Silverstein himself began to write and draw as a child in his native Chicago. After a brief sojourn at the Art Institute of Chicago, he enlisted in the US armed forces during the Korean War, where he landed a job at 'Stars and Stripes', the official newspaper of the US Military.

Working on the paper a cartoonist, he created the 'Take Ten' comic series which later became the title of his first book.

After completion of his military service, Shel returned to Chicago where he began to submit illustrations to national publications. His work soon appeared in magazines such as Sports Illustrated.

In 1957 he was hired as a cartoonist by Playboy Magazine, where he produced a series called "Shel Silverstein Visits', documenting his travels around the world on behalf of the publication.

Silverstein was encouraged to write children's poems by his editor at Harper Collins, Ursula Nordstrom. In 1964, he published his first book of Shel Silverstein poems for children called “The Giving Tree," and went on to win the New York Times Outstanding Book Award in 1974 for his work "Where the Sidewalk Ends."

"The Missing Piece Meets the Big O," a sequel to "The Missing Piece," won the International Reading Association's Children's Choice Award in 1982. A more recent work of Shel Silverstein poems is called, "Falling Up: Poems and Drawings," which appeared in bookstores in 1996, and was roundly acclaimed by critics.

In addition to writing poetry he was an accomplished playwright and songwriter. Silverstein went on to pen 12 books of poetry and illustrations for children, introducing youth to such beloved characters as Headphone Harold, and Danny O'Dare, the dancin' bear. HIs characters are whimsical and endearing, and feature prominently throughout Shel Silverstein poems.

We are pleased to announce that a new work of previously unpublished Shel Silverstein poems has just been released. It is called "Everything On It," and may be purchased by clicking here.

Below you will find a sampling of Shel Silverstein poems for children.

Where The Sidewalk Ends

Let us leave this place where the smoke blows black
and the dark street winds and bends.
Past the pits where the asphalt flowers grow
we shall walk with a walk that is measured and slow
and watch where the chalk-white arrows go
to the place where the sidewalk ends.

Whosever room this is should be ashamed!
His underwear is hanging on the lamp.
His raincoat is there in the overstuffed chair,
And the chair is becoming quite mucky and damp.
His workbook is wedged in the window,
His sweater's been thrown on the floor.
His scarf and one ski are beneath the TV,
And his pants have been carelessly hung on the door.
His books are all jammed in the closet,
His vest has been left in the hall.
A lizard named Ed is asleep in his bed,
And his smelly old sock has been stuck to the wall.
Whosever room this is should be ashamed!
Donald or Robert or Willie or--
Huh? You say it's mine? Oh, dear,
I knew it looked familiar!

A Light In The Attic

Some put 'em in a washer,
Some toss 'em in a tub,
Some dump 'em in a laundry truck
For someone else to scrub.
Some stick 'em in a hamper,
Some stuff 'em in a sack.
I never worry 'bout 'em—
I just keep 'em on my back

Mama said I'd lose my head
if it wasn't fastened on.
Today I guess it wasn't
'cause while playing with my cousin
it fell off and rolled away
and now it's gone.

And I can't look for it
'cause my eyes are in it,
and I can't call to it
'cause my mouth is on it
(couldn't hear me anyway
'cause my ears are on it),
can't even think about it
'cause my brain is in it.
So I guess I'll sit down
on this rock
and rest for just a minute...

Danny O'Dare, the dancin' bear,
Ran away from the County Fair,
Ran right up to my back stair
And thought he'd do some dancin' there.
He started jumpin' and skippin' and kickin',
He did a dance called the Funky Chicken,
He did the Polka, he did the Twist,
He bent himself into a pretzel like this.
He did the Dog and the Jitterbug,
He did the Jerk and the Bunny Hug.
He did the Waltz and the Boogaloo,
He did the Hokey-Pokey too.
He did the Bop and the Mashed Potata,
He did the Split and the See Ya Later.
And now he's down upon one knee,
Bowin' oh so charmingly,
And winkin' and smilin'--it's easy to see
Danny O'Dare wants to dance with me.

For additional background on Shel Silverstein poems, visit the

Shel Silverstein website or the Shel Silvertein page on Wikipedia