Significant Rings Of The Olympics 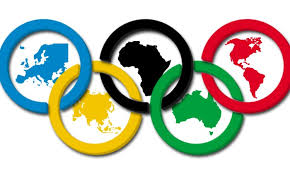 Though aye haint no athlete, nor a cosmopolitan mwm,
this bloke dislikes capricious adrenaline rush
to prove without a doubt
at least to whomever announced
to display eye popping, mouth watering,

nose twitching a notch above chattering class,
I could never be find klieg lights shone one me,
cuz this baby boomer favor modesty,
and allow, enable and provide unconditional
acceptance and/or sir render if a verbal tete a

those trademark circular strunk and white elements
of harried styled, swiftly tailored symbols
decreeing a fresh batch of Olympiads, ought
to be preceded via a topnotch Gumby like
rubbery sprite, who gets trotted out as a nimble

versus biannual, which means twice a year.
The rings are five interlocking rings, colored
blue, yellow, black, green and red on white field,
known as the "Olympic rings". The symbol

infrastructure repairs, but vying to beautify a city
based on bids, or maybe drawing straws)
exerts priority, thus every laborer recruited
to emulsify, fortify, glorify...

and so on...an attempt for a ticket holder
to merely stand upright gets tripped with
mindscape filled to the point of saturation
with supra hue man dare devilish
whirling dervish performances.

Not one of these contenders for top prizes
can be modest, yet here such narcissism
expected, when the crème de la crème
of a well synchronized machine of finely tuned
glass shattering aria re: symphony for
skeletal system, musculature, and love of fitness

presents such a supremely sumptuously
striated squared specimen on the world
wide webbed stage. Aside from vicariously
exalting in the trials and errors of first one,
then the retinue of absolute breathtaking
delight, the ordinary conflicts (between

one warring internecine faction and another
mortal enemy) get suspended for duration
of these celebrations. A fanatic, generic,
heuristic, intrinsic kinetic potential un
leashed from a select body of youths,
young fluid adults athwart cusp and prime of lie

who spent majority of their brief lives
(since most entrants seem to retain
a faint residue of childhood). How
ever many weeks encompasses
the planet agog with exemplars

That infinitesimal fragment of time
(when laying down
of a bomb bin nub bull arms occurs) proves
smarmy, snooty, smutty