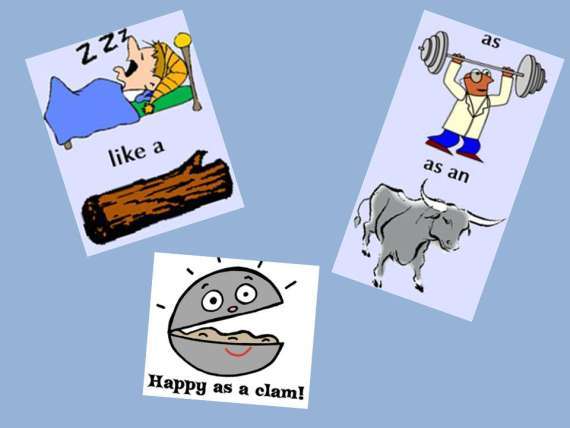 Simile Poetry is a higly creative poetic form that compares two dissimilar things using the words ‘like’ or ‘as’. For example, ‘Her eyes were like two green emeralds,' or 'He was as crafty as a fox.'

Kids can have a lot of fun trying to come up with these types of poems. Here are some more examples:

If you do try your hand at writing some original pieces, try to come up with examples that you haven't heard before.

The very first poem below is a little complicated. Don't worry!  We just wanted to show you how more advanced writers use this device. You will probably find the remaining poems a lot more fun!

The writers at My Word Wizard worked like dogs to put together this collection. We are very proud to share it with you.

She is like a fresh spring zephyr
Scintilating the senses
discharging sweet fragrance,
parfum de l'amour.
As a rose in bloom
she transforms nature into
something numbingly beautiful,
Wreaking havoc on a man’s
otherwise sober comportment.
Her hair is like the finest silk from India
Smooth to the touch.
Skin as fair as ivory, and so pleasing to the eye.
Will one such as she ever love me,
a humble factotum?

A squirmy little worm,
As I was on my break
Crawled right up my left leg
Like some slithery little snake
His skin was rather moist
As a man with too much gel
That creepy little worm
He really made me yell.
And so I lost my temper
Like a lion without prey,
Until a kindly co-worker
Shooed that worm away


Turkey In A Truss

Like a tumbleweed a tumblin’
Aimlessly through town
I journey through my life
In search of firmer ground.
My soul seeks out adventure
Like Tom Sawyer and Huck Finn,
but just the same it yearns for home,
A place to settle in.
I’m really not too picky
Nor prone to make a fuss
But sometimes I just feel like
a turkey in a truss

We had a big ‘ole dog
Who thought he was a hog
Just like a dirty pig he’d squeal,
when it was time for his next meal.
As tenacious as a sow,
As idle as a cow,
Our big ‘ole dog was all mixed up
From a puppy until now.
Then one day the kindly farmer,
On whose farm he’d settled down
Approached our dog real slowly
While wearing a big frown.
The farmer said ‘things will be fine
But you really must agree,
You are a dog and not a swine
Now step inside for tea!’

Her name was Penelope
as pretty as a picture,
And that sir is no joke.
She lived a life of truth and virtue
vowing never, ever to smoke

Penelope frolicked just like a kid
She loved skipping rope but
never ever did.
As mischievous as a cat
We never knew where she was at.


Share Your Simile Poetry and
We'll Publish it Online


Are you a poet or aspiring poet? Our editors are always looking for new poems to add to our collection. Submit your Simile Poetry to our editors by clicking the "submit a poem/contact us" link at the bottom of this page.