Song Of The Seamen And Their Ship Mary Rose 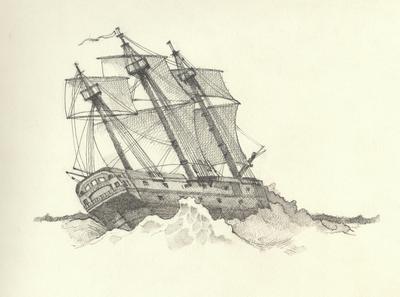 Mary Rose, the mighty sailing sea vessel glided majestically across the waves
She had robustly and bravely sailed the briny waves for many a night and day
With the ocean's heaving gusting squalls blowing off proud stern and mast
Sailing victorious and proud - her billowing white sails were cast
The calm, liquid waters of the sea flowed quietly purple for now-
Unaware of the coming storm that would beat furious against her bow

Her alabaster sails whipped violent and furious in the oncoming storm
Impending doom was yelling its cries while the seamen went unwarned
Down below, inside their cabins the seamen peacefully slept
Wrapped in the secure watch that their gallant captain kept
The oceans black, boiling waves beat savage against starboard and port
As Captain Noe standing fearless - at first quake, did not the storm report

The old wooden beams of the Mary Rose began to restlessly moan and creak
While the blackened roaring, rolling waves beat furious against her feet
Her alabaster sails rose proud- beating mighty against wailing squalls and gusts
While deep inside the bow in bunks, the sleeping seamen thrust

Suddenly...they heard the captain's distraught voice cry out
When the seamen heard his voice -they heard fear without doubt
“Awake, all of ye’ ”, Captain Noe forcefully roared
“Alive! Awake… all ye’ seamen come quickly up on board”!

The savage spirit of the sea reigned fierce with rage and fear
While the brave captain fought - loyal seaman brought up the rear
They courageously fought together - not silenced by the eye of death
As the sea raged violently against them with its brutal, menacing breath

To save their mighty Mary Rose, they’d dip their very souls in blood
Leaving themselves merciless against this drunken, mighty flood
With plank and bow standing fierce between them and their fate
The raging ocean’s fierce, blackened waves - the sea they could not hate

The morning brought the warming sun which rose broad above the waves
The winds had tamed their violent voice against captain and seaman brave
With unshakable courage and seaman’s wit not once were spirits broke
Each cheered his mate and captain strong as they fought with steady stroke
Their peril fought in days of danger and night filled with pain
Their manly courage did not wane - their fight was not in vain
For all the courageous seamen and their brave Captain Noe
Joined together in hand and spirit to save...their proud 'Mary Rose'