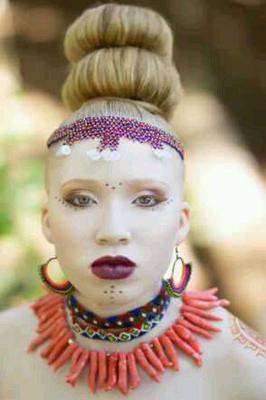 She was never blessed with
the gift of melanin.
And by the way, her name was
Melanie.
She was said to have been created
when God ran out of paint,
she was a saint,
her face was a cleansed canvas for Picasso's art.
Her heart frozen by the pain
in her, just as pale as the face of a scorn.

I called her Sugar_foot, her kisses were sweetened by her righteous tongue.
A drug to my sober life.
Truly she was light, better than mustard,
Caramel cream, better than Ultramel, I bragged about her.
Ngangibakhotha ngaye.
My African Vanilla cream.

Blessed with Albinism, never
lost her optimism,
even though she inhaled criticisms
as her daily oxygen.
They said she was the main ingredient of Inkomasi,
just a metaphor, she was my cream tata.
Blessed were her lips,
more colourful than scarlet velvets.
Eyes were like the sunset when it was reflected by the clear seas.
Her presence felt as if she was a warm breeze accompanying a silent drizzle.
Melanie, she was my Daphne as I was the desperate Apollo.
Greater were those days,
I felt as if I walked on heavenly pavements.
The black pigment is what she never had, but her blonde hair was what she never lacked.
Bless her, for she was once the bright pigment of my imagination.
Lets bow our heads and commemorate her life.
Melanie, the fragment of my imagination.