The boss aka Bruce Springsteen 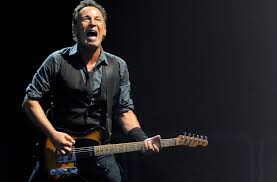 belt out another tune bro!

this cautious man (bobby jean) born in the u.s.a.
grownin’ up in the badlands of atlantic city
bonded with blood brothers
felt born to run along backstreets
in brilliant disguise that did cover me
frequently blinded by the light
of the full moon

where devils & dust - visible dancing in the dark
celebrating like calendar showered 4th of july
or other glory days in darlington county
even though I ain’t got you.

livin’ in the future
mine hungry heart hankered and felt like I’m on fire
for you, this fire in me craved human touch
desire - roaring into the ole factory fire
because I wanna marry you
because the night populated

with girls in their summer clothes
each dazzling like 57 channels (and nothin’ on)
in imagination of my american skin
descended from when adam raised a cain
before last to die forecasting kingdom of days
now dwelling in celestial mansion on the hill.

on the downbound train as living proof
within light of day magic jungleland
policed by highway patrolman i.e. johnny 99
alias johnny bye bye – held up without a gun
defending this lucky town

firing point blank out in the street
that staccato new york city serenade
from no surrender outlaw pete
originally from nebraska.

it’s hard to be a saint in the city open all night
within my hometown
once my father’s house, now my city of ruins
where tis moot to ask does this bus stop at 82nd street?

she’s the one among souls of the departed
no longer stopped by state trooper
precinct based along streets of philadelphia
some crackling like streets of fire
straight time mandate for those armed to the teeth
along tenth avenue freeze-out.

two hearts crushed
along this hard land
for: the ghost of tom joad
the last carnival homage
to wild billy’s circus story
the price you pay when you’re alone
working on a dream
now wreck on the highway.

joining eternally the ties that bind
a tunnel of love
or like the wrestler
pinning opponent tougher than the rest
like laborers working on the highway
chiseled like this hard land!