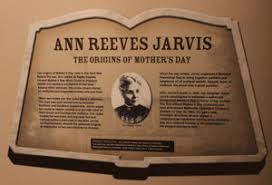 Fast forward to the early
twentieth century 1908 when
Ann Maria Reeves Jarvis (a social activist then,
and community organizer

this event held (rain or sun)
at St Andrew's Methodist Church
in Grafton, West Virginia, which did quicken
in subsequent decades to formal fete,
where poets (like me) did open

tis sin the vulgar appetite of the ole mighty dollar,
but her lofty ambition did get
thwarted by mass marketing
the quaint idea,
plus she feared going in debt

less ness and aplomb
set a course where greater longevity doth hum
all because, she sought to regale "mum."